Our cities are grinding to a halt.  Getting stuck in traffic has become the new norm for many of us.  The promise of our future cities is great but why is progress so painfully slow?

I recently worked with the Nasdaq Entrepreneurial Centre to test our thinking about who Mooven can solve these challenges at scale and why the US market is pivotal to our wider ambitions.

This blog unpacks why we get stuck in avoidable traffic, what brought us to this point and why the United States market is important. 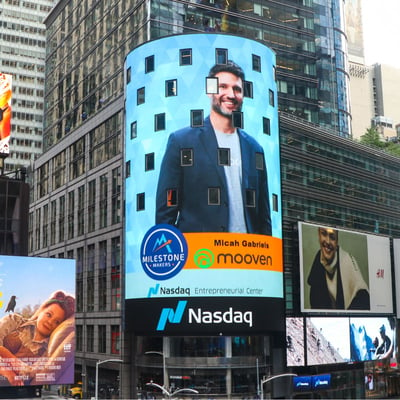 Why is progress so disruptive and expensive?

As we sit in traffic wondering why projects seem to drag on longer than they need to, it's worthwhile considering ‘why’.

What we found is that it’s actually really hard for the people who build and maintain our cities, and countries, to determine the best times and ways to work, let alone gain visibility of the flow-on disruption for surrounding communities.

How can this be?

Surely with billions of dollars spent on roads, rail and public transport and all the hype around smart and connected cities, this work should be run like a German train schedule.

Three forces come together and conspire against the best efforts of an industry:

When you combine these forces we get a situation where many of the rules designed to reduce community complaints result in months or years of additional disruption, billions of dollars of wasted spend and worse outcomes for all.

How so?  Because traffic conditions are highly unpredictable and decisions are made with limited information, the inevitable outcome is overly restrictive, blunt and often arbitrary rules that result in immense and avoidable waste.

The sensors that inform traffic lights are buried in the ground (the black lines you’ll often see on the road) and need to be repaired from time to time.   Watch how a simple job with some well-intended but blunt rules results in increased disruption for local residents and lost productivity. 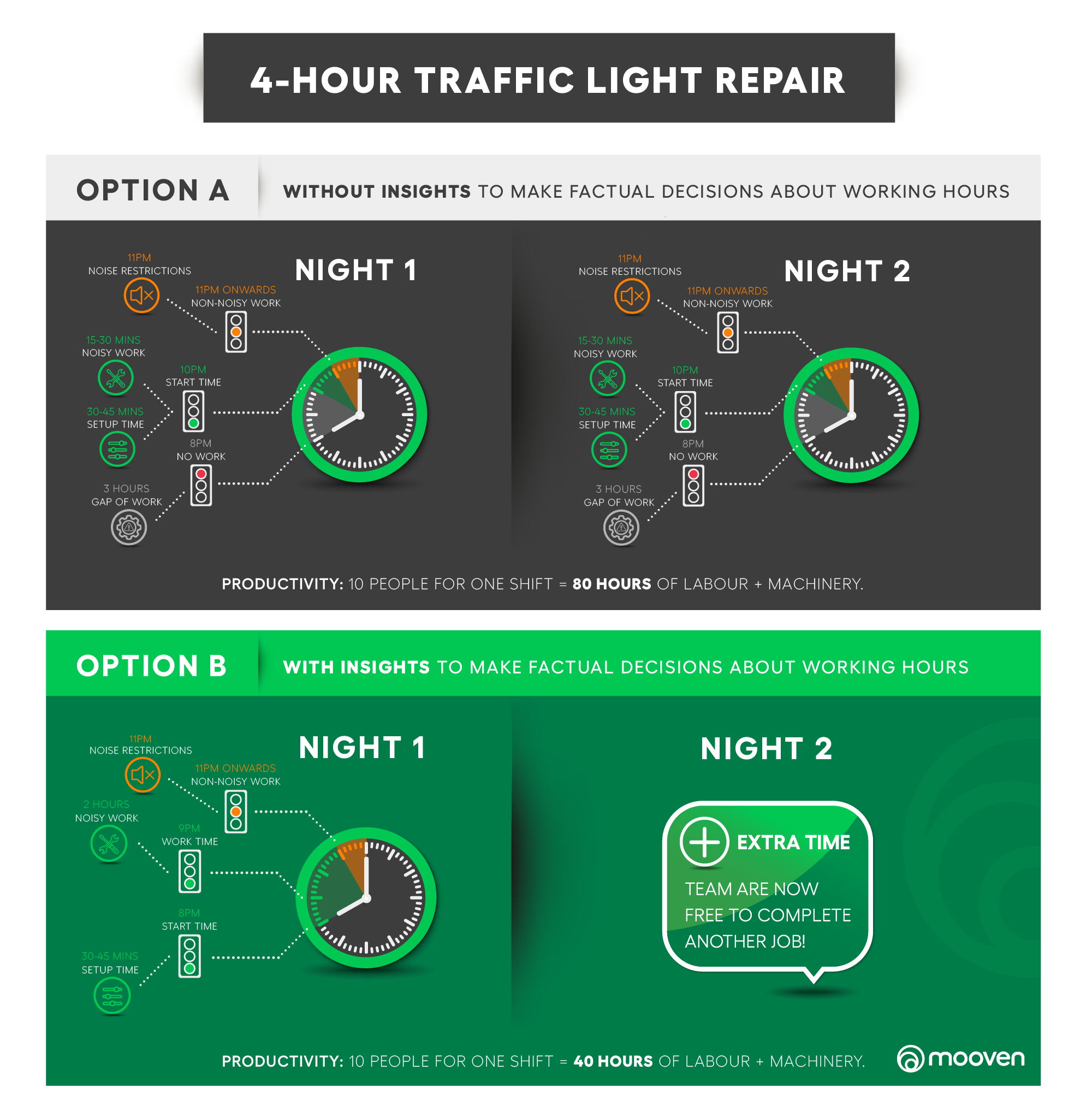 That’s how you have half the duration and cost of infrastructure delivery, just by working smarter around the local environment.

But why are we in perpetual gridlock now?

Good question.  The industry has run successfully for a long time so what has changed? 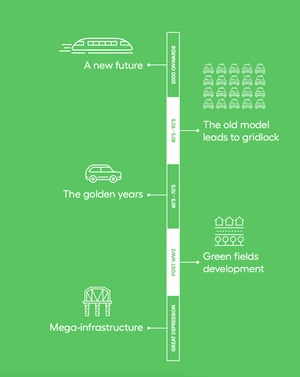 Back to the future

After the Great Depression and World War II we entered the golden years of expansion and automobiles.  Our cities expanded, many of our major infrastructure projects like the Sydney Harbour Bridge and the American Interstate network were built.  Suburbs and the car flourished.

Our vision of an ideal future city has now changed, with a desire to both reintroduce and expand our use of public transit, covering light rail, trams, cycling and walking infrastructure.  The problem is, the process of reshaping a city that is already bursting at the seams is hard, messy and disruptive.

Surely we can just work harder? 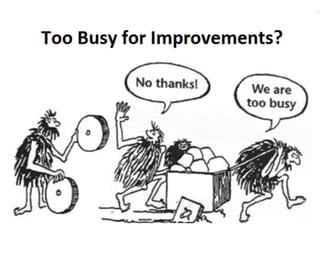 That’s exactly what we’ve been doing for a while now but the pressure on our cities has been exacerbated by historical underinvestment - one of the reasons we reached gridlock.

As we look to squeeze even more work into smaller and smaller potential delivery windows, due to the amount of work simultaneously underway, we see costs increase.

Higher costs and longer projects lead to increased congestion.  Increased congestion puts extra demand on the network, reduces working windows and generates the need for more infrastructure and maintenance.  Not a great cycle.

In many cities and countries, we have now reached the point where there is more work to be done in the next decade than can be achieved, no matter how much we spend.  It’s simply not possible to get the workers or to complete that many projects in the same location within the status quo.

Why ‘incrementally better each year’ matters

It’s not particularly sexy but the impact of getting 1-2% smarter or more efficient each year is quite profound and powerful.

Consider this, between 1995 and 2014 manufacturing doubled the value produced per hour worked while construction remained largely flat.

Let’s put that another way.  If the same gains were achieved for the building of our roads and public transport infrastructure, we could be taking that new way to work in half the time or we could achieve twice as much from the same spend.

One of the reasons for flat productivity has been slow adoption of technology.  Construction is one of the least digitised industries with only Agriculture and Hunting coming in below it in a review by McKinsey.

Bringing together the themes of under-investment in aging infrastructure, rapidly increasing demand for improved public transit (in particular, which involves ripping up busy roads), an increasingly congested, complex and unpredictable roading network with limited digitisation or improvement in how work is carried out, it starts to make sense why many developed countries are in their current situations.

How this relates to Mooven entering the United States

Our work can have real impact.  Achieving the early results we’re getting at a state or country level would mean saving years of disruption, gaining the benefit of 10 years of work in 6 years.  Imagine what this means for social outcomes in a city, equality, environmental gains or the livability of our world.

What makes this exciting is the more people who join this way of delivering infrastructure the greater the value for all involved due to a united and collaborative approach.  This is what Mooven is about but building a business that can have global impact requires focus, speed and resources.  Here’s why the US is important for us.

The United Statues feels the pain like no one else

The US market has the perfect mix of attributes for what we do:  there has been a sustained shortfall in spending that needs (and is starting) to be addressed, they have a lot of roads per capita, low public transit usage and a need to change, all combined with a political environment where complaints and public opinion matter.

The US has the greatest need for what Mooven can deliver, hands down.  Importantly, our home market shares many of the same attributes with large road networks, relatively low public transit and low population density.

Successfully executing in the US doesn’t just see Mooven transform that market, it also enables us to accelerate progress within Australia, New Zealand, Canada, Europe and other future markets.

Speed to achieving our mission is king

Stepping away from the detail, building an offering just for the Australian and New Zealand market simply wouldn’t have the same impact.  We couldn’t justify the same investment in R&D.  We know this is true which means every day we delay slows our progress towards our mission.

Now, this doesn’t mean that we’re thinking of the US as a single market or trying to win anywhere from day one.  We can be hyper-focused on what matters most now.  For us, that’s about gaining some early examples where we can map what has been achieved in Australia and New Zealand to the US market AND understanding how we need to adjust, tweak and refine our commercial strategies, go to market and product to meet the needs of our largest market.

Enter our work with the Nasdaq Entrepreneurial Centre to test our thinking around picking a tight niche to focus on within a state that perfectly matches the characteristics we want to test.

The timing for our work with the Nasdaq team couldn't have been more perfect.  Recent global events have strengthened the tailwinds support Mooven's proposition.  President Biden's $1 Trillion USD infrastructure bill passed in November, providing significant stimulus funding and growth for the sector along with pressure to mobilise quickly.  Coupled with rapid digital transformation and the adoption of new ways of working and teams were forced to work remotely.  Satya Nadella, CEO of Microsoft already said in April 2020 that they had seen two years of digital transformation in two months.  The actual impact is likely to be much greater given restrictions due to COVID-19.

You can’t be half pregnant in building a global, high growth business.  This is why I’m leading the charge front and centre by moving to the United States to accelerate our learnings and execution.